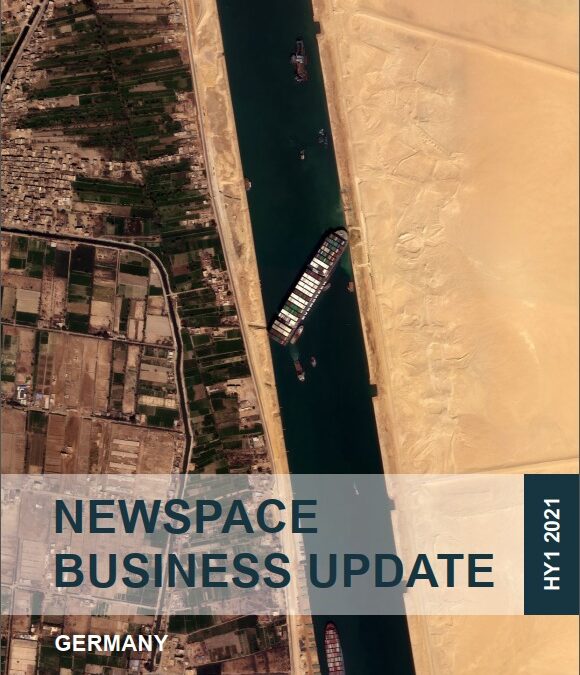 In our ongoing effort to increase market transparency by providing valuable, reliable and up to date insights of the fast-paced and emerging German NewSpace ecosystem, Capitol Momentum has compiled an interim Business Review Report for the first Half Year of 2021.

2021 continued to be challenging for the German economy as the national lockdown due to the COVID-19 pandemic carried on into the 2nd quarter and resulted in production delays due to supply chain bottlenecks. Global economic growth projections have been revised upwards fueled by the increased supply of vaccines against COVID-19, that have been administered in many advanced economies. [Ref. 1] The German GDP is expected to grow by 3.3% in 2021. [Ref. 2] In March, container ship “Ever Given” blocked-off the
Suez Canal, a vital route between Europe and Asia, during a sandstorm and disrupted global trade for 6 days until freed. The event gave opportunity to many satellite companies to provide insights to the public with high resolution satellite imagery of the scenery.

G-7 nations agreed on space debris standards at the G-7 Summit in June. As space debris poses an urging problem for the space community, an international agreement may provide momentum for a number of German NewSpace startups focused on tackling this problem such as OKAPI, Vyoma or DCubeD. In the same month, a tornado destroyed several villages in the Czech Republic, killing five people and injured more than 150. July was characterized by major ﬂooding due to extreme rainfalls across Germany and neighboring countries, evoking one of the deadliest disasters to hit the country since World War II. Climate disasters continued in Europe in July when large wildfires raged through Italy, Greece and the southeastern Mediterranean.

In terms of Space Tourism, US-based competitors Virgin Galactic and Blue Origin overtrumped each other when both successfully conducted crewed spaceﬂights in July.

For the Industry Update Report, Capitol Momentum has analyzed 121 German NewSpace companies, 49% of which
operated in Upstream and 41% in Downstream markets. By technology, 47% of them focus mainly on Hardware and 43% on Software. About 40% of our in-scope companies are less than 5 years, while 69% are less than 10 years old.

The German NewSpace landscape in 2021 was characterized by strong investment deal activity (12) and Downstream investments shifting up to almost 30% of the entire deal count. HY1 has seen accumulated equity investment on disclosed deals of nearly €100m. Most deal activity involved early stage capital rounds (75%). Compared to funding rounds of the past 2 years, we can see a slight shift from Seed to Series A and even Series B rounds in 2021, resembling a maturing process of the market as well as increased venture capital investor interest driving additional funds into the German NewSpace industry. This trend is also supported by an increased involvement of Non-Space Industry investors in NewSpace businesses, expressing the demand and need for new and high-potential, cost-effective business solutions to further advance existing industries and expand into new emerging markets. For the German NewSpace industry, we saw big industry players entering the NewSpace stage in 2021 with Automobile giants Porsche and Daimler investing in micro launcher Isar Aerospace and upscale ride-hailing app provider Blacklane. With 76 top business milestones achieved, 21 new top contracts awarded and with 17 strategic partnerships entered, there is reason to believe that 2021 is going to be another record hitting year for the German NewSpace Industry.

For an in-depth analysis of German NewSpace Industry of the first six months of 2021, download our NewSpace Business Update HY1 2021 Germany here.

We use cookies on our website to give you the most relevant experience by remembering your preferences and repeat visits. By clicking “Accept All”, you consent to the use of ALL the cookies. However, you may visit "Cookie Settings" to provide a controlled consent.
Cookie SettingsAccept All
Manage consent

This website uses cookies to improve your experience while you navigate through the website. Out of these, the cookies that are categorized as necessary are stored on your browser as they are essential for the working of basic functionalities of the website. We also use third-party cookies that help us analyze and understand how you use this website. These cookies will be stored in your browser only with your consent. You also have the option to opt-out of these cookies. But opting out of some of these cookies may affect your browsing experience.
Necessary Always Enabled
Necessary cookies are absolutely essential for the website to function properly. This category only includes cookies that ensures basic functionalities and security features of the website. These cookies do not store any personal information.
Non-necessary
Any cookies that may not be particularly necessary for the website to function and is used specifically to collect user personal data via analytics, ads, other embedded contents are termed as non-necessary cookies. It is mandatory to procure user consent prior to running these cookies on your website.
SAVE & ACCEPT